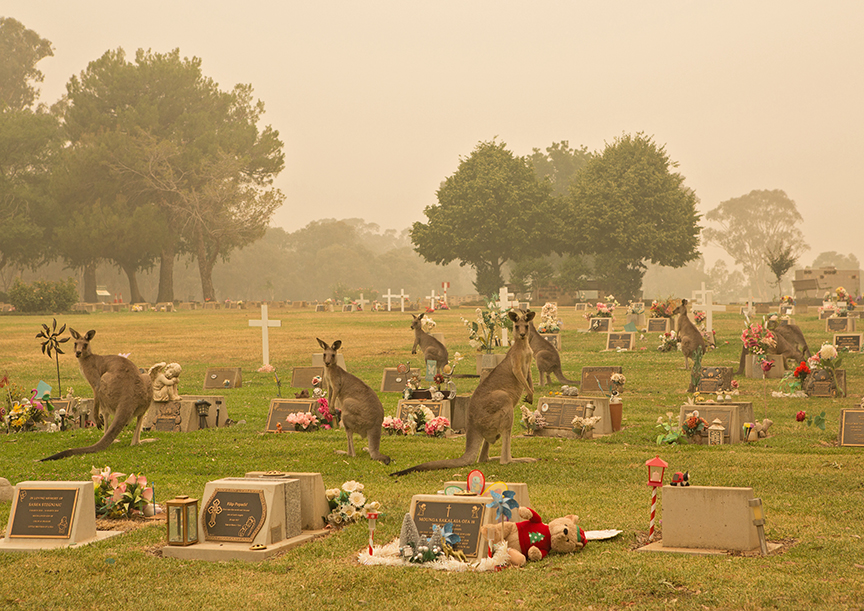 Lib Ferreira, Kangaroos in Queanbeyan Cemetery, NSW, during the fires, 2020.

If a picture is worth 1000 words, then 1000 pictures are shouting bloody murder from the rooftops.

Brainchild of Canberra photographer Hilary Wardhaugh, the #everydayclimatecrisis petition brings together 1000 crowd-sourced images from women and non-binary photographers all over Australia visualising the effects of climate change happening right now. This catalogue of images is addressed to the Australian Government and their inadequate action on climate policy. As an act of intersectional feminism, the petition advocates on behalf of our Australian land, flora and fauna, Indigenous knowledges and future generations. The diverse and personal contributions to the petition raise a call to action in their sheer volume, and will act as a powerful directive when delivered to Parliament in Canberra.

PhotoAccess is proud to be formally launching the Visual Petition in the beautiful Manuka Arts Centre gardens. Join us for an exclusive screening of 150 carefully curated images from the petition, accompanied by a performance from A Chorus of Women and followed by a thoughtful and inspiring panel discussion on the the possibilities for change that exist at the intersection of climate, science, and photography. Drinks, nibbles and seating provided. Picnic blankets welcome!

This launch coincides with and supports the ANU Institute for Climate, Energy & Disaster Solutions ‘Climate Update’, scheduled for February 2022. The #everydayclimatecrisis Visual Petition will be formally opened by the Hon. Lina Burney MP.

Hilary Wardhaugh
Founder, Women Photographers Australia
Hilary Wardhaugh is an acclaimed, respected and awarded photographer with over 24 years of experience in the photographic industry. Hilary’s work has always been interested in people, from corporate headshots, to incredibly moving portraits of people at the end of their lives. In 2021 she formed the group Women Photographers Australia with the aim to address the climate crisis through photography. The first initiative of this group is the #everydayclimatecrisis Visual Petition.

Dr. Janet Salisbury
Founder, Women’s Climate Congress
After working in cancer research, Janet Salisbury made a career change to science communication and was one of the first people in the world to advocate the application of evidence-based medicine methods to environmental management. Janet became a member of Canberra group, A Chorus of Women, and became interested in the potential of the arts to address issues of citizen concern. Dismayed by the political roadblocks to effective action on climate change, even in the face of Australia’s catastrophic Black Summer, she founded the Women’s Climate Congress.

Tracey Nearmy
Photojournalist
An established photographer and videographer, Tracey has worked for numerous publications throughout Australia and overseas over the past 20 years. She is currently based in Canberra working with the AUSPIC team at Australian Parliament House, and specialises in editorial and sports, as well as works with clients in the disability sector and NGO’s. Tracey is a member of Australian photojournalism collective fotostrada.

Dr. Judith Nangala Crispin
Artist and poet
Canberra-based poet and visual artist, with a background in music, Judith has an extensive list of achievements under her belt. As well as a number of poetry publications, she is a proud member of Oculi collective, and Women Photograph. Each year she lives and works with tribal people in the Tanami desert, and has directed major social just research projects. Currently, she is also Poetry Editor for The Canberra Times.

Adrienne Francis
Journalist, ABC Canberra
Adrienne Francis has worked as a radio, television and digital journalist and presenter for ABC Canberra since 2010. During her more than fifteen-year career with the ABC she has primarily worked in TV and Radio News. Adrienne has presented the ABC’s flagship TV and Radio News bulletins in the ACT and Northern Territory and she also worked as a television current affairs reporter for 7.30 ACT, one of Canberra’s most popular TV programs.